When I was growing up, about all I knew about wolverines came from the movie, Red Dawn, and that the Wolverines played football on Saturdays in Ann Arbor, Mich.

But the real wolverines, those fierce carnivores that are officially members of the weasel family but far more befitting of a big cat or wolf, are mythical creatures in places like Alaska.

Riley Woodford of the Alaska Department of Fish and Game paid homage to the wolverine with a profile worth the read.

Wolverines are weasels, Golden said, and have the weasel nature. “That whole family is pretty similar, just the size is different. Ermine can be bold; weasels are an intelligent family of animals and they know how to survive.”

While wolverines are usually solitary, the “bad tempered loner” stereotype gives the impression they are downright antisocial. Golden visited a facility in Washington that’s home to about 40 wolverines. They shared a large common area and he said they were quite tolerant and social with each other.

“If resources are limited that can cause conflict, but they can be social,” Golden said. “If food is plentiful, they’ve got no reason to worry about each other. We’ve seen them in April from the air wrestling and playing with each other, they weren’t fighting, they’re socializing.”

They are territorial, in the general sense of the word, but Harrington and Golden use the term “home use area” to describe the area they favor. “They pick areas they maintain and keep to themselves, males will overlap with females, but males don’t overlap much with males, or females with females,” Harrington said. “They need resources, and they pick an area where they can make a living and survive.”

He said a wolverine can defend itself pretty well, but it’s no match for larger predators.  “Two wolves can kill one,” he said. “You hear stories about them chasing bears off, I’ve never seen that happen, or known anyone who has.” 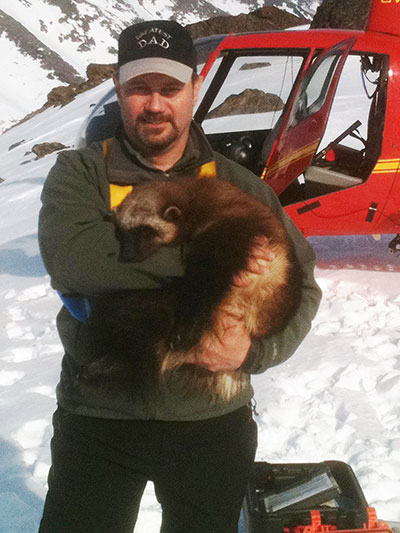 Mike Harrington holds a young female wolverine. Wolverines are sexually dimorphic; males are about 30 percent larger than females – 30 to 40 pounds compared to females in the 20 to 25 pound range. This female, CWF006 has a blue ear tag and was pregnant when she was caught on March 7, 2012. In this picture she had just been recaptured to retrieve her collar and is about to be released.

“They’ve got a pretty good set of tools on them; a really good nose, they can smell food over long distances or buried well under the snow,” Golden said. “They can climb trees. They have a really warm coat. They’ve got strong claws for digging and defense, and incredibly strong jaws for biting and crushing bone and frozen meat – not the same crushing power as a wolf, but they’re not as big, a big wolverine is 40 pounds and small wolf is 60 pounds.”

“You look at them, they’re mostly built for scavenging,” Golden said. “But they’re very opportunistic and regularly kill small game. They’re not as fast as wolves, and they don’t work in packs, but they can be more predator than scavenger if the situation allows for it.”