Technically, Veterans Day is on Saturday but it’s being observed today, so please take a moment to give some thanks to our soldiers and sailors who have sacrificed so much for their country.

Thankfully. the U.S. Fish and Wildlife Service is honoring Alaska’s role in World War II with an upcoming 75th anniversary commemoration of the state’s role in the Pacific Theater when Japan attacked and eventually occupied areas of U.S. soil.

Here’s a timeline of the events courtesy of USFWS Alaska:

Kiska’s sole inhabitants were the crew of the U.S Aerological Detail. When the Japanese arrived, they fled to the hills; most were captured after a few days. William C. House was not initially captured; he was able to hide out for 50 days before finally choosing to surrender to the Japanese. Freezing and starving, he had survived on earthworms and vegetation and was a meager 80 pounds when he turned himself in to his captors. 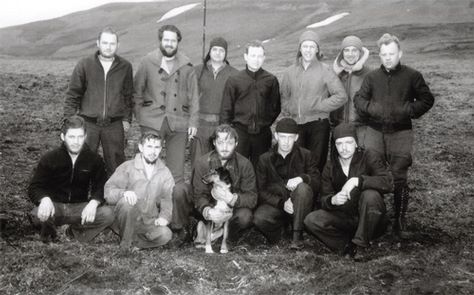 The crew of the U.S. Aerological Detail on Kiska prior to their capture by the Japanese in 1942. William C. House is in the second row, third from left. Courtesy National Archives and National Park Service.

The Japanese would stay for over a year, building bunkers and infrastructure, blasting tunnels, and even planting gardens–they had intended to be here for the long haul.

Exactly six months to the day after the Japanese bombed Pearl Harbor, 1,200 enemy soldiers landed and captured all of the island’s 47 residents. The Attuans would be held as prisoners in Otaru, Japan for over three years. 22 would die, including 4 babies born in captivity, due to starvation and the rigors of captivity. Lives and legacies forever altered, upon return to the United States the survivors took up residence in unfamiliar places–their Attu home was destroyed and there were too few able-bodied enough to rebuild.

“One day, 14 Sept, 1942 a coal carrier came and they told us to get ready we gone to Japan. We take our stuff to vessel. We got aboard at late pass midnight. They put us down in hole where the coal had been. Everything all black and dirty. Some of the little kids didn’t want to leave Attu. They cry but Japs solders pick them up throw them down in hole too. There are 42 of us Attu people and Mrs. Jones. Some old peoples very bad scared.” ~Mike Lokanin (From Attu Boy, by Nick Golodoff) 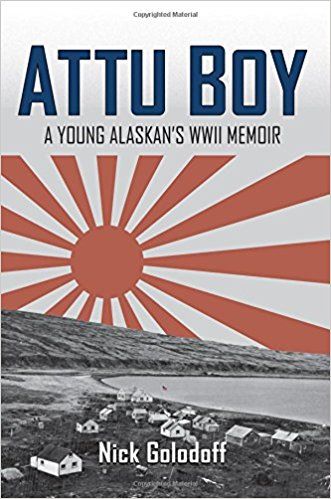 “As things were, our men were put to work. Shortly after that, they started admitting our people to the hospital. The people were getting sick one after the other until I was almost the only one left at home to cook. While I was doing that, they took my husband to the hospital. After they took my husband, my children were starving. So when I went to fetch some water, I would pick orange peelings off the ground. Then I would cook them on the top of the heater. Then I fed them to my children, and only then would they stop crying for a while.” ~Olean Prokopeuff (Golodoff ), (From Attu Boy, by Nick Golodoff)

“We lost twenty-one people in Japan. My step-mother gets sick first. She got TB and Japs take her to kind of hospital. But there is no heat and very little food so she died. Some died of beri-beri. Our chief, Mike Hodikoff and his son, George, eat from garbage can and get poison food. Lots of children and babies die because they hungry and nothing but rice.” ~ Alex Prossof (From Attu Boy, by Nick Golodoff)

While the Attu residents would be the only Unangax sent overseas as prisoners of the Japanese, other Unangax villagers would find themselves victims of circumstance, indecision, and racism–issued by those that had come to “protect” these citizens. A tragically similar story would play out through nine Unangax villages in which U.S. authorities would hastily order villagers to grab one suitcase, board a ship, and watch as their homes and churches go up in flames.

On June 14, the residents of St. Paul Island were given one hour to pack one bag each, and were ordered to board the overcrowded Deralof Army transport vessel, not yet knowing the arduous and deplorable conditions that would meet them at their internment site at Funter Bay in Southeast Alaska. There were 477 Aleuts and 19 Fish and Wildlife Service agents evacuated from the Pribilof Islands that day. 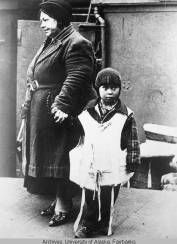 Daniel C.R. Benson, a U.S. Fish and Wildlife Service agent and caretaker of St.George details his orders for the evacuation:

“I was first instructed to prepare the village for destruction first that night by placing a pail of gasoline in each house and building, and a charge of dynamite for each other installation such as storage tanks, light plants, trucks, radio transmitters, receivers, antenna masts, etc. The packing of everybody was to be very simple–absolutely nothing but one suitcase per person and a roll of blankets.” 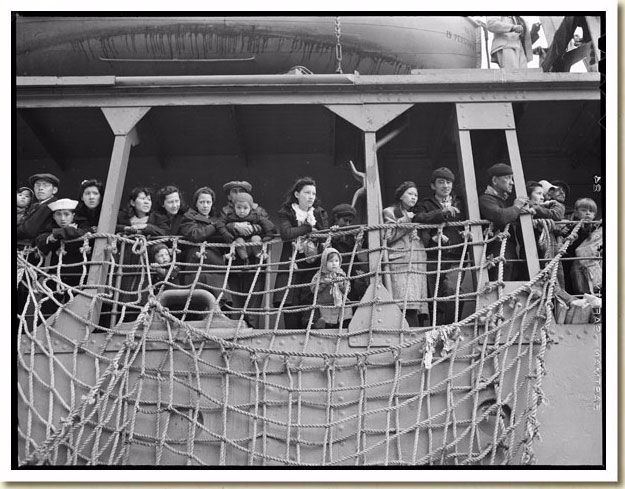 Evacuees of St. Paul Island aboard the U.S. Army transport, Delarof. National Archives, General Records of the Department of the Navy (NARA 80-G-12163)

“We the people of this place wants a better place than this to live. This place is no place for a living creature…” ~Petition from group of Unangax women interned at Funtner Bay. The Aleut peoples’ internment at Funter Bay lasted two years under the supervision of the Fish and Wildlife Service, and many did not make it back. Nearly 50 people died from the cold, crowded, difficult and inhumane conditions. Their graves remain in Funter Bay. Read more here.

The United States took strong initiatives to take back the islands. 4,500 U.S. Army troops secured the island of Adak, to be used as a staging post for the recapture of Kiska. It took only two weeks for Army engineers to construct an airfield on the island, and on September 14, Consolidated B-24 Liberators used the airfield in their raids on Japanese occupied Kiska. There would be repeated bombing campaigns on the island throughout the remainder of the Battle of Attu.

On March 26, 1943, Japanese ships in the Bering Sea traveled near Russia’s Komandorski Islands (aka Commander Islands) in an attempt to deliver supply reinforcements to Japanese soldiers on Attu. They were intercepted by U.S. Navy forces and after several hours of fighting, the Japanese suddenly withdrew. Japanese soldiers on Attu and Kiska would now haveonly meager and sporadic supply deliveries via submarine for the remainder of their Aleutian occupation.